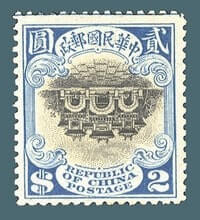 Magnificent example of a rare and valuable Chinese invert issue. It is part of a lengthy set first issued in the form of a London printing in 1913. The 1913 London printing was followed by a 1915 first Peking printing, which produced the error stamp that is highly sought after today. Only around 30 examples are known to exist today. 1915 Hall of Classics invert hammers for $160,000 at Cherrystone auction that took place in September, 2013.