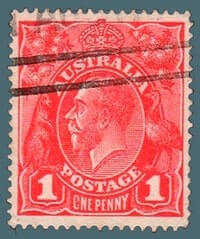 1p red King George V stamp, 1914 is a rare Australian stamp that was printed with a sideways watermark, which is now considered as its unique feature. The current world record for a King George V Penny Red stands at $41,041, after a mint block of four sold at a 2001 auction. Even before the flaw was detected, King George V Penny Red was one of the most collected stamps. Should the anonymous collector decide to sell this Australia`s rarity, he will definitely get around $100,000.