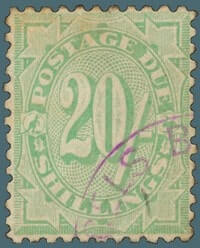 1908 Australian 20 shilling postage due is an extreme Australian philatelic rarity. The stamp was released to replace the previous postage due series, which featured the value in the border. Such a printing caused the difficulties in distinguishing shillings from pence. The replacement postage dues featured a stroke after the 20 shilling. They were distributed to some areas of Australia. As the stamps couldn`t be purchased in Post Office, only few of them were used before the other replacement was introduced. The example of a used 20 shilling with stroke was sold for $77,000 at Robert A Siegel auction in New York in November, 2013.