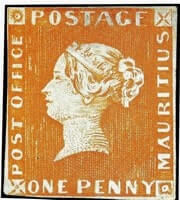 Just like the Mauritius 2 penny blue stamp, the orange-red penny stamp is among the most uncommon stamps. Both are close siblings produced the same era: September 21 1847 by a British colony in Mauritius.

The very first stamps had a wording on the left panel: Post office. Similar stamps that were generated one year later, in 1848, had a different wording: Post Paid. This slight difference brought about an argument that had some people think that both Mauritius 2 and 1 had a printing error. This controversial claim was later refuted when it was proven that both stamps with the wording “Post Office” were indeed printed in 1847.

Because of its rarity, and antique nature, the Mauritius 1 Orange-red stamp is highly valued by collectors. On David Feldman’s website, this stamp is said to have fetched 1.7 million dollars in 1993 when it was sold last. On Scotts World Catalogue, it is worth 1.25 million dollars in minted statues.