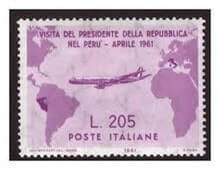 The Gronchi Rosa is a rare Italian postage stamp design error. It was part of a 1961 issue for the voyage of president Giovanni Gronchi to three South American countries. The 205 liras rosa was intended for the stopover in Peru. The artist made a mistake with the boundaries between Peru and Ecuador.

This is among the relatively old stamps that have a precious error. Gronchi Rosa is a rare Italian stamp that was issued in 1961. Unfortunately it had an error which is today appreciated and celebrated by world-famous philatelists. The flawed stamp was being made for the excursion of Mr Giovanni Gronchi, the president of Italy, to 3 nations in South America. It contains four visible maps in pink: Europe, Africa, South America, and North America.

The error was discovered fast and the wrong stamps were substituted for the correct copies. Even so some incorrect copies made their way to the hands of private collectors. One such Giovanni Gronchi stamp is valued at eight hundred and ninety Euros.