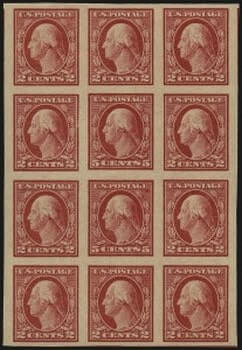 During the course of production of the normal 2c plate No. 7942, three positions were noted to be defective. The plate was returned to the siderographer, who burnished out the three positions and mistakenly re-entered them using a transfer roll for the 5c stamp. The error passed unnoticed and the sheets were issued to the public Perf 10, Imperforate and Perf 11 (Scott 467, 485 and 505). The imperforate is by far the rarest of the three.