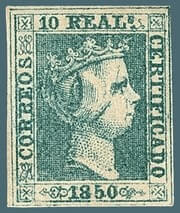 10r green stamp is one of the first issues of Spain introduced on January 1, 1850. The item shows Isabella II, a Queen of Spain from 1833 until 1868, and is inscribed “1850” at the bottom. Following the example of Great Britain, Spanish stamps do not show the name of the country. Apparently, it was assumed that placing the image of the monarch on the stamp gave sufficient information for postal employees all over the world to recognize the state of origin. A very fine and particularly rare original-gum example of 1850 10r green was sold $1,700 at Robert A. Siegel sale that took place in December, 2015. As the auction house stated, this is an “original gum example on the First Issues of Spain that is seldom encountered.”