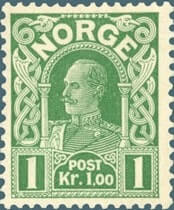 1kr light green King Haakon stamp is a very interesting issue by Norway Post. The stamp shows the Prince Carl of Denmark. He accepted the role of becoming the first independent Norwegian king in 1905 after 586 years; he took the name “Haakon”, an old Norse name used by previous Kings of Norway. He is revered even today because of the resistance he led against the Nazi invasion during WW II. The monarch died in 1957 after reigning for 52 years. The block of four 1k light green “King Haakon” stamps appeared at Kjell Germeten’s sale that took place in April, 2017. This is one of two blocks that are known to exist today. It was sold for $5,924.