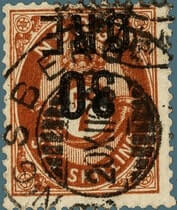 7 skilling red brown is one of six definitive lower-denomination Norwegian stamps issued between 1872 and 1875. This item features a crowned Post Horn, with the denomination numeral in the center. Although the first Post Horn stamps went through many production changes, their design became the basic one for the following issues within this series. 7 skilling red brown with 30 øre is considered to be one of Norway’s most spectacular philatelic varieties, only 4 copies of which exist today. The item that hasn’t appeared on the philatelic marked since 1938 was sold by Skanfil’s Moldenhauer auction house in November, 2018. The lot fetched 74 000 NOK (or roughly $3,217).