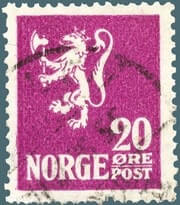 In 1922, a new design was introduced, the Lion Rampant. 20o deep violet is one of the first issues of four stamps that are characterized by the Roman script “NORGE” and the line below “ORE”. It features the Lion Rampant (the coat of arms adopted after independence in 1905) and is also thought as one of the first Norwegian commemorative stamps. The Postal Service decided to release commemorative issues because of two big events that happened in 1914: the Centenary of Norway’s Constitution and the dissolution of their four-hundred-year relationship with the Kingdom of Denmark. The block of four 20o deep violet Lion Rampant stamps was sold for $1,481 at Kjell Germeten’s sale that took place in May, 2017.