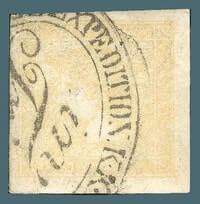 The Austrian Empire newspaper stamps were issued between 1851 and 1856.They are typographed on unwatermarked, machine-made paper, and imperforate. Their design shows left-facing profile of Mercury. The red Mercury stamp mentioned above is considered to be the rarest; however there are some other examples of this issue that are worth collectors’ attention. For example, 6kr yellow newspaper stamp that is thought as an extremely fine gem of Austrian philately. The specimen that once belonged to Ex Baron Alfonse Rothschild and was subsequently purchased by the Halls in 1947 was offered for $6,250 by Robert A Siegel during its sale of “Rarities of the World” that took place in May, 2001. The stamp offered here was the finest example in that collection.