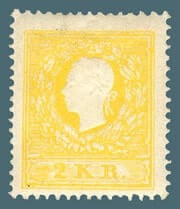 2kr yellow Emperor Franz Josef stamp was issued by Austria Post on November 1, 1858. It features the 28 year old Emperor Franz Josef I who was Emperor of Austria, King of Hungary, and monarch of other states in the Austro-Hungarian Empire, from 2 December 1848 to his death. The embossed portrait of the emperor had him posed left with a laurel (bay) wreath crowning his head. The issue was valid throughout the Empire. The example with original gum, in fresh and very fine condition was sold for $2,600 by Robert A Siegel in May, 2001. The stamp was purchased by the Halls in 1950 and accompanied by original lot card, signed twice in pencil on back.