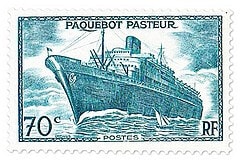 This is another rarity of the 20th century. This special stamp was issued to serve as a reminder of the steamer Pasteur, an ocean liner built for the South Atlantic navigation company. In general, it has been sailing for 41 years and was considered one of the most beautiful passenger liners of the time. The stamp depicting Pasteur was printed in dark blue-green tones. Interestingly, there is no red overprint on this copy, and there are only 8 such copies known, which makes them extremely valuable.

A great 20th century rarity is included among the worldwide issues offered during the auction’s opening session on Wednesday.

Printed in dark blue green, the handsome but otherwise unassuming French stamp from 1941 commemorates the SS Pasteur, an ocean liner pressed into service as a troop ship that had been commissioned the previous year.

Though printed with a 70-centime denomination in the lower left corner, the horizontal stamp was issued only as a surcharged semipostal: a red overprint applied two short horizontal lines across the 70c inscription, and added “1f” (franc) in the upper left corner and “+1f” in the upper right corner.

The semipostal is listed in the Scott Standard Postage Stamp Catalogue as France Scott B114.

In the 76 years since the stamp was issued, just eight genuine examples have been identified with the red surcharge missing. One of those eight errors is included in this Kelleher sale.

The stamp shows a nicely centered design and is described by Kelleher as having toned original gum “not really visible on front.” It is signed “A. Brun” on the reverse by noted France and colonies expert Aime Brun.