When Man try to tell his Problems / Torture / Struggle / Harassment of marriage and family, no one ready to listen, instead they laugh at him; Many men are ashmed to talk about they are beaten at home by their wives and her Family. becuase of  Indian mentality no one will beleive, and everyone beleive women word when she tell lies with crocodile tears.
So much for the law to promote domestic violence against Indian Husbands and wonder no social organizations have done any research on that, no one demanded the data of Crime against men by women and crime against women by another women.

A online based Foundation called Save Family, which is having 5 online group, and 10 on filed NGO , received more than one lakhs mail from different Part of India in last one year , finally conducted the study on Indian Husbands in association with MyNation

The study conducted between April 2005 and March 2006 by doctors and IT Engineers Community of MyNation.

Save Family Foundation , Delhi, has been selected for presentation of Gander Biased LAW of India and the effect of the same to the husband vs.wife relationship and the effect of Future child's growth , soon their concern that very soon the Indian Civilized Institution of marriage System going to close to the animal society principal and in coming years there will be huge Father less Childs.

About 1650 Husbands aged between 15-49 years and selected through random sampling were interviewed using a schedule adapted from the WHO multi-country study on Husband's health and domestic violence.

The study looked at all four aspects of domestic violence " Economical,emotional, physical and sexual. Economical violence was found to be the commonest with 32.8% respondents saying they had faced it at least once,followed by emotional (22.2%) , by physical (25.2%) and sexual violence (19.8%). An interesting finding was that the probability of violence increased significantly with the duration of marriage particularly if it was more than seven years old. But, says Dr J K Grover, one of the researchers,
Our interviews also showed that Indian Husband who had experienced some form of violence during the first year of marriage, continued to do so for the rest of their lives. It is not something that just goes away.Explaining his reasons for choosing the subject, he says, Contrary to popular perception, domestic violence is a hardcore public health issue with far-reaching health connotations like mental illnesses and stress disorders.

But most studies done so far have been in the hospital/clinic setting, so they focused on physical health that too of the severe kind that may need medical help. So the whole spectrum has often been missed. I wanted to get a community perspective to the matter.Said Dr Sudip , MMBS ,MD The study has clearly shown that domestic violence is perpetrated across all socio-economic classes. Our respondents came from diverse backgrounds and the study was limited by the fact that Indian Husbands as a rule are not very forthcoming about these issues.
Yet the figures were significantly high. Every 8 minutes one Indian Men end their life and the chances are 200% higher after marriage as per stastics of Crime bure of India.

The study found that a high proportion of Indian Husbands who had experienced domestic violence were either well educated or earn good amount of money by their day night hard work.

Objective of the Study:

Is there any study as per the definition of "Domestic violence LAW of India" against Men by Indian Government ? Ans: No.

Is there any protection or LAW, for Indian men, who face the Domestic Violence? Ans : No

Crime Bureau data 2005 : Married Men Sucide : 52k vs Married Women Sucide 28K.Still there is no LAW to Protect Men why ?

Will Our LAW Maker change the LAW 304B( dowry death) to 304C( Sowry Death) and 498A ( harrasement to wife) to 498B ( Sowry harrasement by wife) and Domestic Violence Act to Gender Equall Domestic harmony Act ?

According to Labour and Employment Ministry, more women are getting employment even as men are being laid off. The data available for period from 2001 to 2005 says it straight. The number of employed people in both public and private sector came down by over 1.3 Million in this period. But this fall was solely because of men losing their jobs. The number of employed men dropped by 1.4 Million, from 22.84 Million in 2001 to 21.44 Million in 2005. More than 82% Taxes earned by Indian Government from Indian men, but reality is in last 60 Years Budget, the Fund for "Men Well fare " always is "Zero", in inspite every day more than 192 Men end their life compared to 112 Women as per Crime Bureau Reports.

How Women Harass:.
When husband come home exusted from work,his wife started to grummble, as indian women are famous for murmuring and cursing;
Most of the indian wives are housewifes, when husband come home from work, they delibaratly delay food, and not serving on time, some husband prepare food for them self.
Withhold sex without reason, as man in india cann`t have sex with his wife, For Indian women sex is bargaining tool to get things done from husband,Even he is not having sex, he can be charged with Rape, If not charged with impotent with one word of wife.
Most of the women Raise thier children against thier own Father,specially Boys;
Force man to send out his parents to orpanage or old age Home;
Many men are threatened by Brother in law or Father in laws,to act as his wife says.
Take all his earning / Salries
Refuse to entertain husbands family or not look after his old parents;
Force man to pay for wifes Family, but stop monetery help to his Family..

Talking about the way forward, Mr. Mahesh Tiwari a Young Supreme Court lawyer says, False Women's empowerment in the name of Wife Empowerment , ensuring a lot of old aged Mothers to be live in oldage home just to avoid any harassment to their sons.Other than this False alegation and biased judgements which force husband to pay alimony to runaway wife for no mistake of his, which indirectly effect his parents, when large sum of the money goes to her.

In our study, conducted by MyNation Foundation along with Save Family foundation ( ) on Domestic violence against men, between the 10th of March 2005 and the 30th of September 2007. We interviewed and went through some 1650 Indian men's personal cases and concluded that Indian women are most abusive and dominating, from our study. 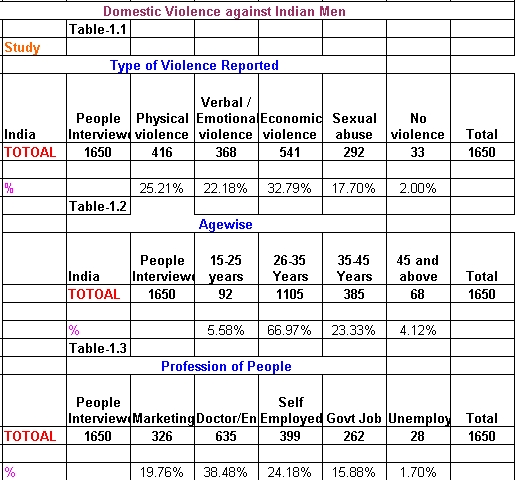 This is not biased or single sided study and is unlike some women organizations; anyone can browse the detailed description of the trauma suffered by these Indian men on some public blog sites like http://498a.wordpress.com  or http://victims-of-law.blogspot.com

We also setup Polls over a period of the past 2 years, on domestic violence against men, and out of 295 Ballots:

99 men said they are verbally abused

91 men said they are mentally tortured

73 men said they are Denied or withheld sex for no reason; some demanded sex even when they came home exhausted from work.

32 men said the wife's relatives, who even threatened to kill, physically abuse them

This study and Poll shows that most of the Indian women are verbally abusive. No need to show her the art to twist tongue, they are born with the Art. They know how to insult men; even insult his old aged parents in front him or vise versa. She will find faults in everything, in his profession, attitude and day to day work, even in bedroom; as all men are not capable to satisfy the needs after some age or have some physical problem; mostly this physical disability in bedroom occurs because of sarcasm of wife. This verbal abuse leads to mental torture, but society and judiciary consider women can't verbally or mentally abuse / harass men.

For Indian women sex is a bargaining tool to get things done; they can deny sex, withhold sex without reason; as per psycologists its a mental torture for men; but Indian judiciary never admits it as a domestic violence, they consider all men to be rapists.

We also found out that when things go wrong or when husband is not following what a wife demands, her family, in laws start to threaten to load him with false cases like anti dowry (498a) or Domestic Violence Act. If that does not work, they use force, physically torture or issue threats to the man's life. When we tried talking to men about this menace, many of them refused to comment as they are afraid to talk about it.