Rekha Sharma Chairperson, of @NCWIndia in her latest tweet she posted

This ‘son crazy’ society and family drove a woman crazy and made her kill her daughters and herself. Though she is still alive but has she ever lived? 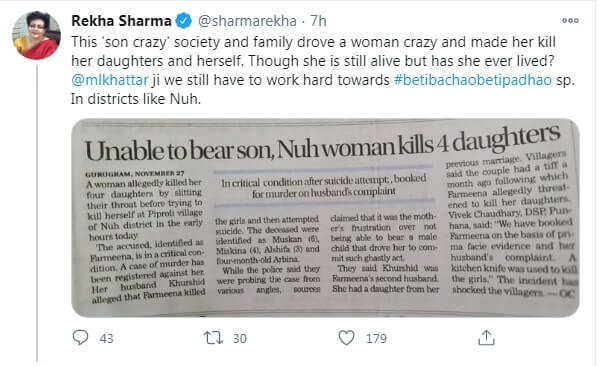 This 'son crazy' society and family drove a woman crazy and made her kill her daughters and herself. Though she is still alive but has she ever lived? @mlkhattar ji we still have to work hard towards #betibachaobetipadhao sp. In districts like Nuh. pic.twitter.com/Sw3D7DqjP8

Few days back she locked her Twitter handle after similar tweet, even though she has not changed her baseless allegation towards society.

by this tweet she is not only Supporting / Promoting and Encouraging women to kill innocent children and justifing by just blaming on men or society.

If Man/husband expect a boy child after 4 girls is not wrong. he nowhere asked his wife to kill those innocent Girls. If there is a demand then she has option to move out of marriage, no need to kill Innocent Children.
This incident of murders not only shows the mentality of Indian women, but

They can make separate Women only reserve for such women or shelter homes with their 50,000 crore Plus yearly government grant. Rekha sharma what happens to those crores of grant ? used to kitty Party or as Party funds?
THIS IS REAL FACE OF NATIONAL COMMISSION FOR WOMEN

3 thoughts on “NCW, Promote and Support Murders by Women”