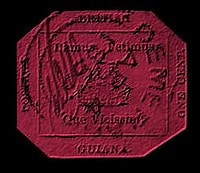 The British Guiana 1c magenta is regarded by many philatelists as the world’s most famous rare stamp. It was issued in limited numbers in British Guiana in 1856, and only one specimen is now known to exist. It is the only major postage stamp ever issued that is not represented in Britain’s Royal Philatelic Collection.