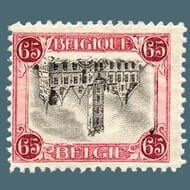 Dendermonde is a small city in East Flanders that suffered heavy damage from the war.

The Inverted Dendermonde is considered to be one the most expensive and one of the most famous error stamps of Belgium. This unique item was first issued in 1920, and it features the image of town hall of Dendermonde upside down. The post office withdrew these items before they could be sold to the general public. The other copies of this remarkable error probably were used on mail and later destroyed.

There are just 14 copies known to exist, one of which is in the collection of chess legend Anatoly Karpov. A wonderfully fresh and fine example of this great rarity, featuring strong rich colors and impressions on bright paper, well centered was sold for $130,000 at Spink auction that took place on June 18, 2009.