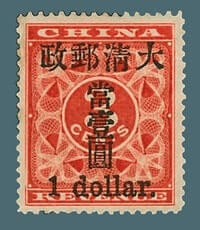 Red revenue large figures surcharge $1 on 3c stamp is one of the most valuable rare Chinese stamp. As philatelists assert, only 32 items were released. Red revenue stamp was made with a dollar imprint to commemorate this reform. Due to some mistake, the dollar was printed too small. The stamp with a smaller imprint is very valuable today. It was sold for at Interasia auction that took place in June, 2013. The stamp featuring exquisitely bright colour, unused with much original gum, was sold for $878,908.