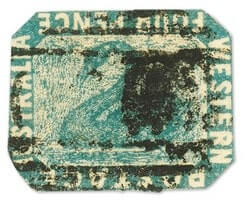 1855 Inverted Swan stamp is considered as one of the first world`s invert stamps. Technically, it is the frame that is inverted, not the image of the swan, but this interesting item is commonly known as the Inverted Swan. Before the error was detected, 388 stamps entered the postal circle. Today only 15 of these special philatelic items were preserved and they are very expensive. One of the specimens was sold for £122,400 at Spink`s Lord Vestey sale on May 19, 2015 (it`s around $171,543).