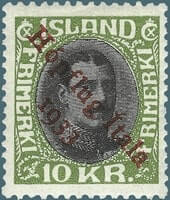 The first airmail issues that were actually inscribed “FLUGFRIMERKI” or “FLIGHT STAMPS” did not appear until 1934. 1k-10k Hopflug Air Post overprint was released on June 16, 1933. One of the specimens of this scarce air post in a very fine condition was offered by Robert A Siegel in May, 2015. Accompanied by 2014 Moller certificate, this bright lot fetched $2,600.