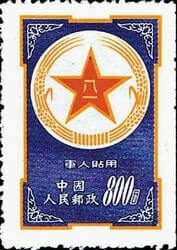 The Blue Military Stamp is a blue stamp for military use in China. In 1953, a set of three stamps, in orange, brownish red and blue, were designed and issued to the soldiers who were on active duty for free. Patterned with emblem of the People’s Liberation Army (PLA), the stamp has a face value of 800 old yuan (1 US cent).

However, shortly after the stamp was issued, there were reports that the confidential information was easier to be taken out of envelopes featuring such a stamp. As a result, all copies of the stamp had to be returned and destroyed, but a small number of them remained with the army.