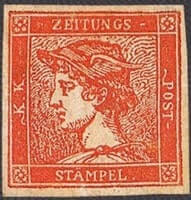 Red Mercury, produced in 1856 Austria, you will realize what a profitable venture stamp collecting really is. This antique stamp was first released on newspapers. It is one of the most expensive newspaper postage stamps in Austria. It is indeed very rare today considering that it was created more than one hundred and fifty years ago.

The Mercury stamps were being issued in three different colors– red, yellow and blue. The red mercury were printed in 1856 and stopped in 1858. They ended too soon. But fortunately some copies were recovered among passionate collectors. Today the value of the Red Mercury Austrian stamp is forty thousand US dollars.