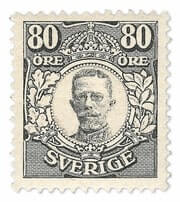 The stamps of this series show a portrait of one of the most contradictory figures in the history of the country. After the death of the king, his portrait in the design was updated and an image of a lion was added to it. This lot was realized by Spink back in 2008.