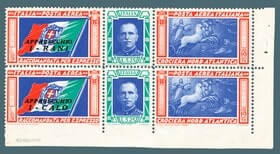 1933 Balbo Triptychs is one of the most extraordinary sets of Italian airmail stamps. This philatelic item was issued in 1933 by Italy to commemorate a special Trans-Atlantic flight that was led by General Italo Balbo. He flew from Rome to Chicago where the World’s Fair was being held. The triptych consisted of a registered air express label, a regular postage stamp and an airmail stamp. Because of their high price, these stamps were not very popular among philatelists as a complete set had to include 20 sets of the two triptychs. Nowadays 1933 Balbo Triptychs is much sought after, perhaps for the same reason. A pair of two 1933 Balbo Triptychs was sold for $55,000 at Cherrystone auction in September, 2013.