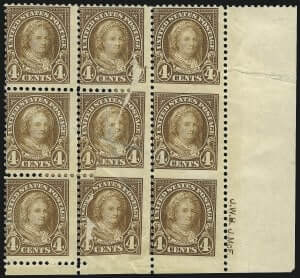 4c Yellow Brown, Vertical Pair, Imperforate Horizontally (556a). Block of nine containing one vertical pair of the variety, bottom right corner selvage with “J.W.B.” and “J.McF.” plate finisher’s initials, the block was damaged and patched during production with brown paper affixed to back at the Bureau, partially erased blue crayon rejection mark

According to Gary Griffith in his book United States Stamps 1922-26, the brown paper on the back was a common Bureau repair, where sheets of 400 or half-sheets of 200 that were mangled in the perforating process were taped back together in order to salvage usable panes. Often, if one pane of 100 was damaged, the remaining panes could be salvaged and put into circulation. Sometimes the damaged and taped panes found their way into circulation, probably from being erroneously placed among the undamaged panes.