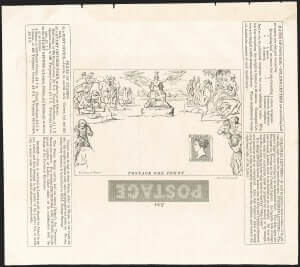 First United States Government Printing of a Stamp Image. Two items, first is page 547 from the Resolutions of the 26th Congress 1st Session, dated June 10, 1840, with a proposal by Senator Daniel Webster to reduce U.S. postage rates, followed by “Extract from a newspaper published in the city of London.” dated April 28, 1840 concerning “THE PENNY-POSTAGE STAMPS.”, explains in detail rates and uses of the new adhesive, the next page is a full-size reproduction of the 1p Mulready letter sheet superimposed with an incomplete rendering of the 1p Black adhesive with the corner “bent over” to show that it is not part of the letter sheet

This facsimile of Great Britain’s Mulready and Penny Black was printed in 1840 as part of the Resolutions of the 26th Congress, in which Daniel Webster introduced a bill to reform postage rates. Accompanied by a 1990 American Philatelist article on Webster and the Congressional Mulready