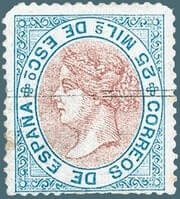 25m blue and rose frame inverted is a remarkable Spanish stamp that was released in 1867. This a definitive issue denominated in Milesimas that shows Queen Isabella II who was queen of Spain from 1833 to 1868. The only certified “genuine” used example of this impressive rarity was auctioned by Spink in June, 2009. The lot had a light bar cancellation, warm rich colors, and small faults including light thinning, trivial stain at right and a rounded corner at bottom right. Despite these defects the stamp proved to be highly collectible. With 1969 RPS certificate (showing corner perforation tips intact before they became rounded) the item was sold for $4,000.