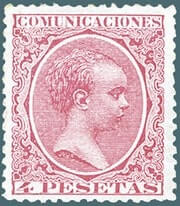 4P carmine rose King Alfonso XIII stamp is quite interesting Spanish philatelic item that features the Spanish king at age of four. Alfonso XIII was King of Spain from 1886 until the proclamation of the Second Republic in 1931. He was monarch from birth as his father, Alfonso XII, had died the previous year. His mother, Maria Christina of Austria, served as regent until his 16th birthday in 1902. A wonderfully fresh mint single example of 4P carmine rose King Alfonso XIII stamp was auctioned by Spink in October, 2009. The lot, particularly well centered for this terribly difficult issue, featuring lovely bright color, in a very fine condition, managed to fetch $1,250.