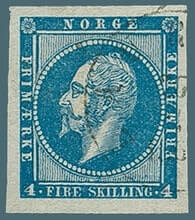 Oscar 4 sk blue released in 1856 is one of the greatest Norwegian issues. This is a definitive stamp that displays the left-facing profile of King Oscar I who was a generally an enlightened monarch, and attempted to established equality between the two kingdoms. It should be mentioned that his portrait appeared only on Norwegian stamps, but never on Sweden philatelic items. Oscar 4 sk blue stamp was typographed, perforated 13, and unwatermarked. An outstanding example of this rarity was offered by Corinphila auction house in May, 2015. Being described as “an exceptional imperforate example, lightly cancelled by ‘Laurvig’ datestamp (25/7) in black”, this bright lot fetched $3,965.