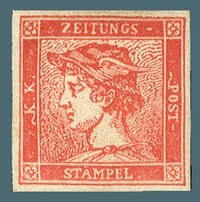 The Red Mercury is considered by many as the scarcest Austrian newspaper stamp. It was issued for the mailing of newspapers in Austria and Lombardy-Venetia. This item features a profile of Mercury, the Roman messenger god, and is not denominated as the value of the stamps was determined by their colour. A red, or scarlet, issue with the Mercury design was released in 1856. However, it was soon superseded by a new design depicting Franz Joseph which came out in 1858, and only a few copies have survived. The Red Mercury stamps are quite rare. An unused specimen with original gum was auctioned for a hammer price of €40,000 (roughly $46 335) plus commission by Auktionhaus Felzmann (Düsseldorf) on 5 November 2015.