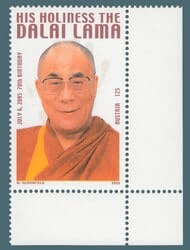 Dalai Lama stamp is one of the greatest Austria modern philatelic rarities. The Dalai Lamas are believed by Tibetan Buddhists to be manifestations of Avalokiteshvara or Chenrezig, the Bodhisattva of Compassion and the patron saint of Tibet. Because of pressure from the Chinese embassy on the Austrian government, the intention to put these bright items into circulation was not realized, although all the preliminary work on the design of the issue had been completed. However, some local citizens managed to grab some examples of Dalai Lama stamps. It is thought that only 30 items survived. A pane of ten Dalai Lama stamps was offered by Felzmann Auctionhaus during its public and postal history auction on 5th to 7th July, 2018. It was sold for €4,000 (roughly $4,660).