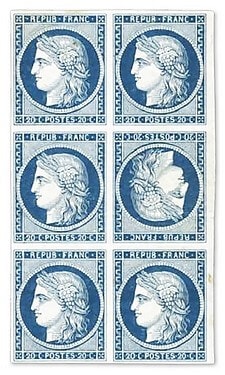 These pairs were released in 1850 and have been in circulation for 2 years. A large number of such inverted pairs survived, but only 2 unused pairs remained intact. These items are considered a rarity and are highly valued in the market. It is known that this series was created by Anatole Auguste Hulot. He produced the stamps of France until 1876, after which his works were transferred to the Bank of France, which offered more favorable production settings. Hulot is considered the inventor of tete-beche. Some sources believe that the first tete-beche appeared as the result of the error in the manufacture of the printing press, while others consider it just an advertisement and even a marketing solution used to emphasize the impossibility of counterfeiting the stamps printed by Hulot. The copy was sold at a Robert.A.Siegel auction in 18th June 2010.