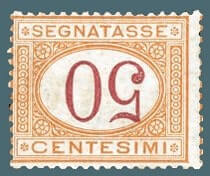 1870 50c ocher and carmine, inverted numeral is the phenomenally rare error of the early postage due printing. Collectors should pay attention to the fact that 50c Orange and carmine with inverted numeral issued in 1890 is relatively common and not as sought after as its predecessor. There are many differences between these issues: the shades vary enough to make the distinction easy, the numerals are different on the high values between the two printings etc. It is not known how many 1870 50c Ocher and carmine inverted numerals survived, but this stamp is definitely a great postage due rarity of Italy and of the entire world. One of the specimens of this impressive philatelic item featuring attractive colour, fine centering and exceptional original gum quality, was auctioned for $9,500 at Spink on January 29, 2008.